The EPAC basic building block is a tile containing up to 8 vector processors and specialized units. The processors are coherent, sharing L2 cache banks through a Network-on-Chip, each bank with its associated Home Node agent. through a Network-on-Chip. The processors will support RISC-V vector instructions, and will also control the specialised units dedicated to Stencil and Deep Learning acceleration. The vector and stencil capabilities will address HPC workloads, while the Deep-Learning units will target AI applications.

The vector processor architecture  will be based on these guiding principles:

The dedicated unit architecture, on the other hand, will be geared towards a few specific applications. This specificity will be leveraged to explicitly manage the data placement and transfer from and into local scratchpad memories, targeting high-energy efficiency

The EPAC tile will be integrated both as a node in the GPP mesh, and as a stand-alone Test Chip for demonstration and software debugging purposes.

The compiler team at the Barcelona Supercomputing Center working on EPI have setup of a Compiler Explorer for an LLVM-based compiler that targets the RISC-V and the V-extension (still draft) architecture.

Compiler Explorer is intended for small programs or snippets not for large applications.

We have also integrated our own user-space functional emulator `vehave`. This emulator traps the vector extension instructions emitted by the compiler and emulates them with scalar instructions. This way we can execute vector applications and check their correctness under a RISC-V Linux environment. Both real hardware, such as the HiFive Unleashed, or `qemu-user` can be used. Our Compiler Explorer uses `qemu-user`. 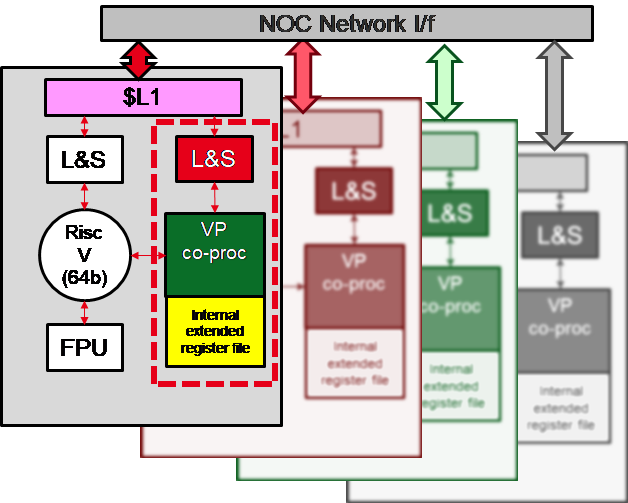 The VaRiable Precision Unit enables efficient computation in scientific domains with extensive use of iterative linear algebra kernels, such as physics and chemistry. Augmenting accuracy inside the kernel reduces rounding errors and therefore improves computation’s stability. Usual solutions for this problem have a very high impact in memory and computation time (e.g. use double precision in the intermediate calculations).

The hardware support of variable precision, byte-aligned data format for intermediate data optimizes both memory usage and computing efficiency. When the standard precision unit cannot reach the expected accuracy with standard precision (aka double), the variable precision unit takes the relay and continues with gradually augmenting precision until the tolerance error constraint is met. The offloading from the host processor (GPP) to the VRP unit is ensured with zero-copy hadnover thanks to IO-coherency between EPAC and GPP.

The VRP is embedded as a functional unit in a 64-bits RISC-V processor pipeline. The unit extends the standard RISC-V Instruction with hardwired arithmetic basic operations in variable precision for scalars: add, subtract, multiply and type conversions. It implements other additional specific instructions for comparisons, type conversion and transfers to cache. The unit features a dedicated register file for storing up to 32 scalars with up to 256 bits of mantissa precision. Its architecture is pipelined for performance, and it has an internal parallelism of 64-bits. Thus, internal operations with higher precisions multiple of 64 bits are executed by iterating on the existing hardware.

The VRP programming model is meant for smooth integration with legacy scientific libraries such as BLAS, MAGMA and linear solver libraries. The integration in the host memory hierarchy is transparent for avoiding the need of data copy, and the accelerator offers a standard support of C programs. The libraries are organized in order to expose the variable precision kernels as compatible replacements of their usual counterparts in the BLAS and solver libraries. The complexity of arithmetic operations is confined as much as possible within the lower level library routines (BLAS). Consistently, the explicit control of precision is exclusively handled at solver level. 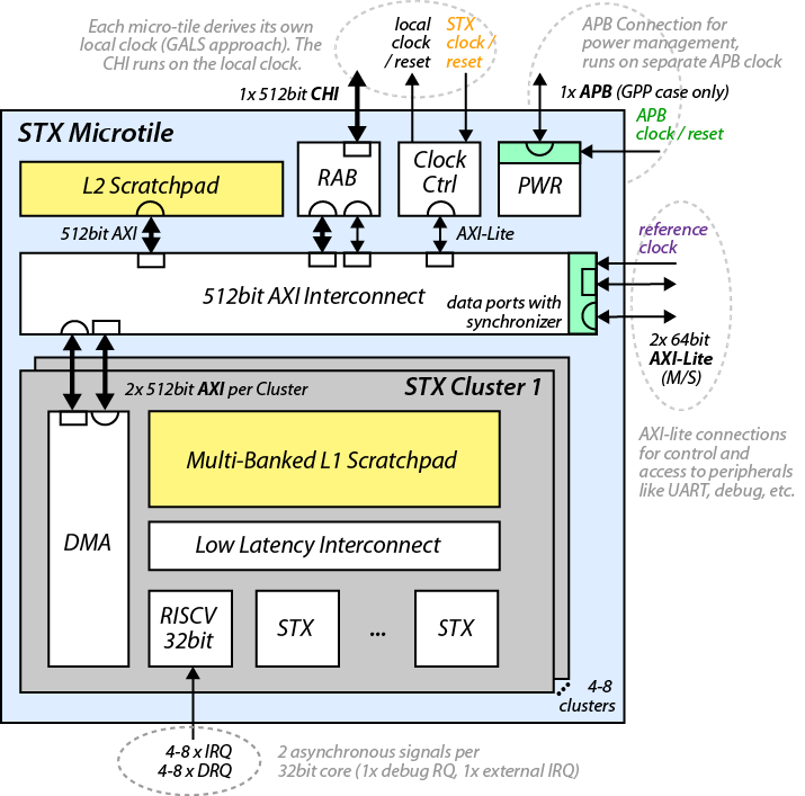 From the beginning, EPI explicitly considered “specialised blocks for stencil and deep learning (DL) acceleration. The vector and stencil capabilities will address workloads in HPC centres, while the DL block will target learning acceleration” as part of the acceleration stream motivated by “optimised performance and energy efficiency” for “specialised computations”. In the initial DoA, two different domain-specific accelerators (NTX for machine learning, and a stencil accelerator) were suggested. During the first few months of the project, researchers from Fraunhofer Institute, ETH Zürich and University of Bologna were able to merge the functionality of both units into a very efficient computation engine that has been named STX (stencil/tensor accelerator).

Such “domain-specific accelerators” are now a major trend in industry, as can be seen by multiple new announcements in the 2019 Hot-Chips symposium and AI Summit by industry heavyweights as a multitude of startups that have presented acceleration engines that were based on specialised datapaths and not general purpose vector units, confirming the significant differentiation in architecture needed for achieving top efficiency and performance in the machine learning domain.

The main goal of STX is to achieve a significantly higher (at least 5x-10x) energy efficiency over general purpose/vector units. The efficiency tells us how many computations can be performed with the unit, and the early target for the STX unit was to achieve at least 5x more energy efficiency (TFLOPS/W) than the vector unit on deep learning applications. In the first few months of the project, it became clear that these estimations are rather conservative, and the effective efficiency within EPI chips will be significantly higher. For applications that require only inference using quantized networks, this efficiency will be another 10x higher.

STX has been designed as a modular building block with several parametrization options. Each STX accelerator consists of several clusters of computing units, a typical instance would have four such clusters. Each cluster in turn consists of specialised computing engines as well as up to two RISC-V cores that are used to control the computing engines and perform additional operations. All these units will access a local scratchpad memory, which will be filled using a centralized DMA unit. This configuration allows for 64 GFLOPS (single precision FP), and multiple instances of STX can be instantiated in an EPAC tile.

STX is programmed using OpenMP, there are solutions that allow regular operations to be offloaded to the STX unit from an Arm system (in the GPP) or the 64-bit RISC-V core (in the EPAC tile) using both GCC and LLVM based flows that will be fruther refined as part of the project.

@EuProcessor
On 22 September there will be 2⃣ round tables with @Atos, @fz_juelich, Leonardo, @e4company, Seco and @Unipisa about: ➡️ The European Roadmap Towards HPC: Industrial and Scientific Perspectives ➡️ HPC Continuum: The Italian Industry in the EPI and Pilots.
@EuProcessor
The Conference intends to provide an opportunity of reciprocal meetings and knowledge on industrial and research activities for academicians, practitioners, and managers who operate in the field of electronic applications.
@EuProcessor
📢September 21-22. ApplePies2021 conference will be held in Pisa 🇮🇹 and online. More about the program ➡️https://t.co/SOQEQOqqC5 Free registration is required ➡️https://t.co/RzKE7RcdmE.
@EuProcessor
The @Etp4HPC European #HPC handbook is out! 📢 Find EPI on pages 22-25, among other interesting HPC projects! @Etp4HPC handbook is available here 👉https://t.co/LsSoYW65hG
@EuProcessor
More about upcoming EPI events here: https://t.co/TjxVeFWdPQ
@EuProcessor
➡ Avispado: A RISC-V core supporting the RISC-V vector instruction set (Roger Espasa/@semidynamics). Mario Kovač (@fer_unizg) will give a presentation on 3 September titled: European Processor Initiative and EU Projects Towards Exascale Computing at @euro_par Conference.
@EuProcessor
The following EPI-related presentations will take place in ACM Summer School: ➡ Performance analysis and hybrid programming in HPC (Jesus Labarta/@BSC_CNS, ➡ Vector acceleration in HPC and Edge Devices (Mauro Olivieri/@BSC_CNS) and...
@EuProcessor
Summer vacation is over and it is time for fall activities and events! 🧐 This week, EPI partners are participating in @TheOfficialACM Europe Summer School and @euro_par Conference.
@EuProcessor
Interesting news from @eFlows4HPC! https://t.co/XwRH6xbQK4
@EuProcessor
EPI has a new Chairman of the Board! 📢 Eric Monchalin from @Atos, the company that coordinates the EPI project, is going to lead 28 partners from 10 countries in their efforts 👇 https://t.co/LUeD2kMaMX

Eric Monchalin is the new Chairman of the EPI Board 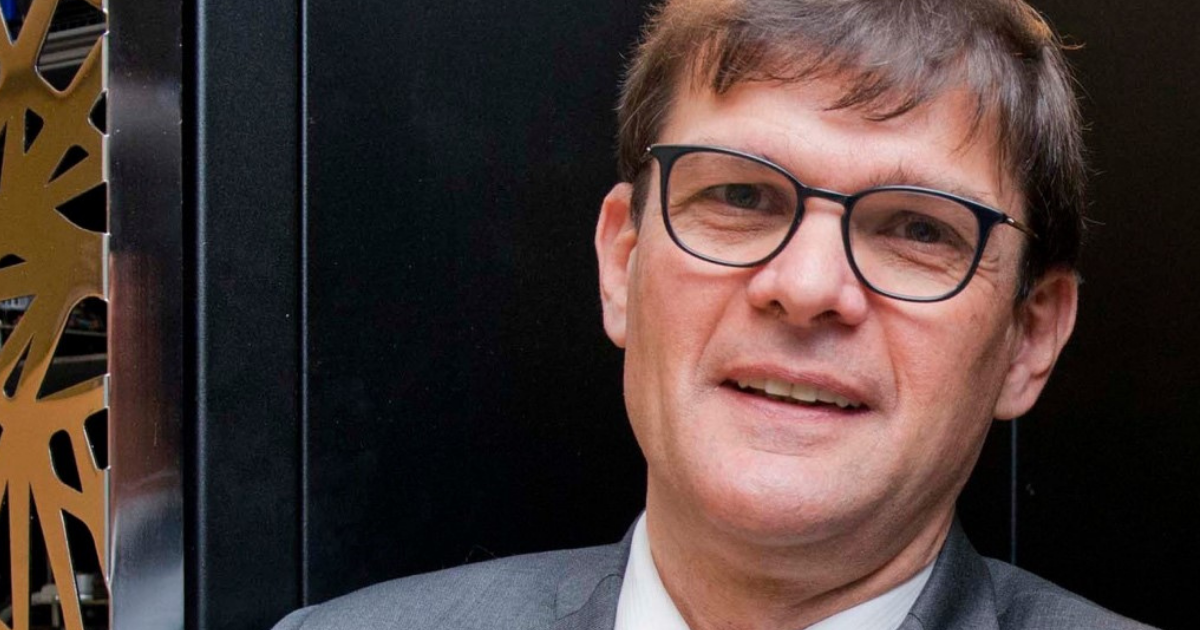 General Assembly of European Processor Initiative has selected a new Chairman of the Board in July. Eric Monchalin from Atos, the company that coordinates the EPI project, is going to lead 28 partners from 10 countries in their efforts to design and implement a roadmap for a new family of low-power European processors. Eric is […]

Taking place on 30 August – 3 September 2021, the second ACM Europe Summer School on HPC Computer Architectures for AI and Dedicated Applications will be co-hosted by Barcelona Supercomputing Center (BSC), in conjunction with the Universitat Politècnica de Catalunya – Barcelona Tech (UPC). The programme of this year’s summer school, which will be fully […] Knut Hufeld, Senior Director R&D with Infineon and an Automotive Stream representative in EPI, talked about the developments in the stream with Ralf Hartmann. 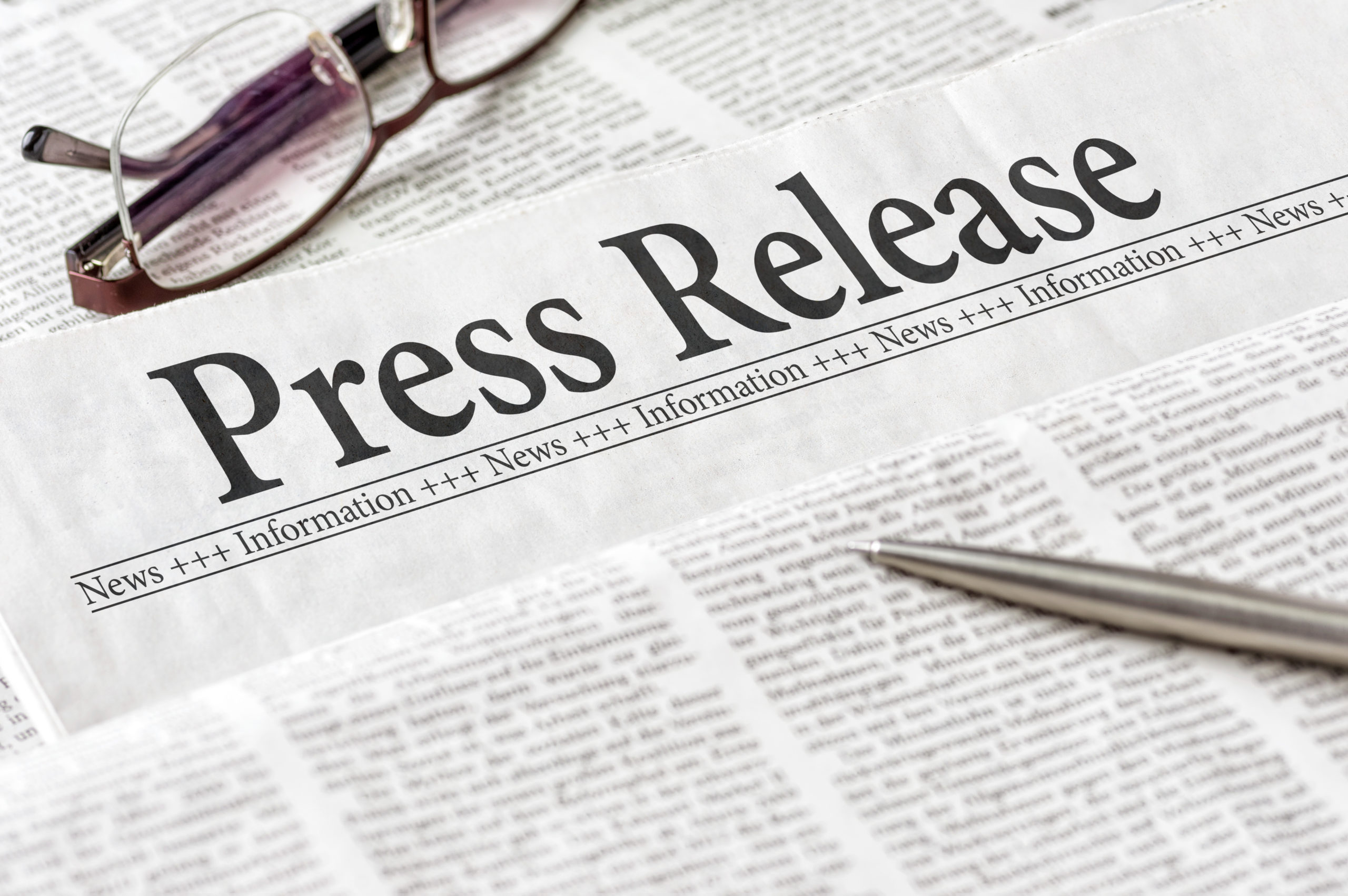 The European Processor Initiative https://www.european-processor-initiative.eu/, a project with 27 partners from 10 European countries, with the goal of helping the EU achieve independence in HPC technologies, is finishing its second year of activities. The project is unveiling an updated roadmap and announcing a virtual booth at Supercomputing. Jean-Marc Denis, EPI's Chairman of the Board, was invited to KSC20 as a keynote speaker with a talk titled "The European approach for exascale ages. The road toward sovereignty”.
Our website uses cookies to give you the most optimal experience online by: measuring our audience, understanding how our webpages are viewed and improving consequently the way our website works, providing you with relevant and personalized marketing content. You have full control over what you want to activate. You can accept the cookies by clicking on the “Accept all cookies” button or customize your choices by selecting the cookies you want to activate. You can also decline all cookies by clicking on the “Decline all cookies” button. Please find more information on our use of cookies and how to withdraw at any time your consent on our privacy policy.
Accept all cookies
Decline all cookies
Privacy Policy